This would make a good commercial. 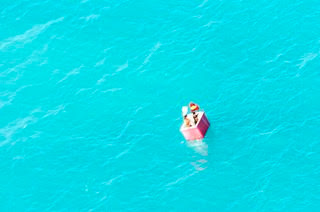 The two Burmese fisherman floated in an oversized cooler for 25 days.

TWO fishermen amazingly survived 25 days adrift in an Esky (ice cooler) after watching 18 of their crew sink with their ship in wild Torres Strait seas.

The two men, believed to be from Burma, escaped to the large red industrial Esky as their 10m wooden fishing vessel sank on about December 23.

But they were finally rescued only when they drifted to 60 nautical miles northwest of Horn Island, where they were spotted by an Australian Customs helicopter.

Authorities last night could not explain how the men had survived their ordeal.

“They are lucky to be alive,” media spokeswoman for Australian Maritime Safety Authority, Tracey Jiggins, said.