With the great gains in security efforts are now underway to preserve Iraq’s “Cradle of Civilization.” 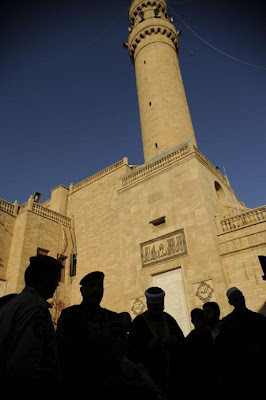 On one of the two most prominent mounds of Nineveh ruins, rises the Mosque (an Nestorian-Assyrian Church before) of prophet Younis “Biblical Jonah”, the son of Amittai, from the 8th century BC which is believed to be the burial place of him, and where king Esarhaddon had once built a palace. In religion, a prophet (or prophetess) is a person who has directly encountered the divine and serves as an intermediary with humanity. Amittai, a biblical character, was the father of Jonah the prophet.

This old shrine standing on the site of a Christian church is a stone’s throw from the built-up walls and gates of Nineveh. 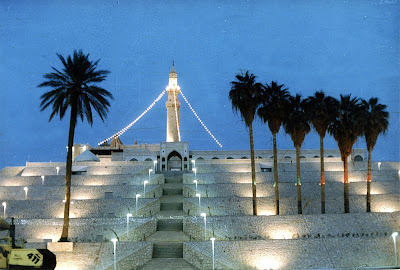 In the middle of the mosque stood a sepulcher, covered with a Persian carpet of silk and silver, and at the four corners, great copper candlesticks with wax tapers, besides several lamps and ostridge shells that hung down from the roof. A whale’s tooth, appropriate to Jonah’s well-known adventure at sea, is said to be preserved there. A sepulchre (also spelled sepulcher) is a burial chamber.

It is one of the most important mosques in Mosul and one of the few historic mosques that are found in the east side of the city –NationMaster.

More photos inside the shrine here.
Thanks BG!