Barack Obama, one of this year’s “Top 25 Fittest American Males”, is back on the cancer sticks. 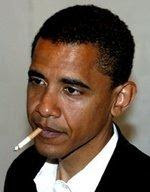 Barack Obama received this ridiculous award from Men’s Health magazine earlier this year even though he is a smoker.

But, Barack says all of that puffing is going to change…
In an interview this weekend Barack Obama promised not to smoke in the White House: