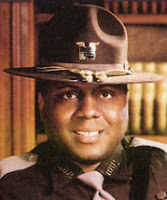 An off-duty Oklahoma City trooper tackled a man praying to Allah who had just threatened to kill everyone at a Burger King.
Oklahoma Highway Patrol Trooper Sheldon Robinson (pictured) saved the burger joint from a massacre.
Jihad Watch and the Tulsa World reported:

OKLAHOMA CITY All Oklahoma Highway Patrol Trooper Sheldon Robinson was looking for was a burger and an oil change on his day off.

But Thursday he got a standing ovation from members of the Oklahoma Turnpike Authority for his heroic actions in between.

On Sept. 5, Robinson dropped his wife and two children off at the Burger King restaurant at 41st Street and Memorial Drive and was pulling into an auto dealership across the street for an oil change when his cell phone rang.

“My spouse told me there was a man inside with a gun, saying he was going to kill everybody,” said Robinson, an 11-year veteran of the highway patrol who is assigned to the Creek and Muskogee turnpikes.

Robinson turned around in time to see people fleeing the building, including his wife, who grabbed the couple’s two children and hid in a nearby trash container area, closing the doors behind her.

It was only an instant, but Robinson said it seemed like hours before he got his truck turned around and pointed for the Burger King.

“I was relieved to see them in the Dumpster area, but I knew I had to go in there and see what was going on,” he said.

Robinson, wearing his trooper badge around his neck and carrying his weapon, parked his truck and peered in the window of the Burger King.

Inside was a man dressed in black. A Glock .40-caliber handgun and a full box of ammunition sat on the tabletop next to him.

When the man briefly removed his hand from his gun, Robinson, who had approached from the man’s blind side, grabbed his arm.

Now alone in the restaurant, the two men wrestled on the floor before Robinson got one of his handcuffs around the man’s arm.

“The second one didn’t lock in place, so we went down again,” Robinson said. “He was a pretty stout guy.”

Robinson had the man fully cuffed by the time Tulsa police officers arrived.

“It was one of those deals of being in the right place at the right time,” Robinson said. “I believe he would have loaded up that gun and gone to town because he was praying for Allah to help him carry out his mission.”

Jerome Norvell Denson, 24, of Tulsa was arrested on charges of attempting to perform an act of violence and possession of a firearm while in the commission of a felony. He remains in jail awaiting a preliminary hearing.