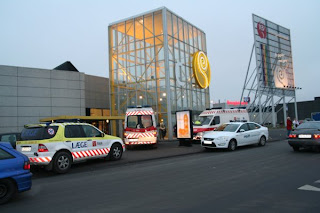 Two were injured in a mall shooting in Denmark today. (Ekstra Bladet)

Israel Radio is reporting that a ‘Palestinian’ opened fire on a group of Israelis in a supermarket just outside of Copenhagen.

More… Ekstra Bladet has this on the shooting:

Two people were injured, since shortly after 15 shots were fired in Rosengårdscentret center in Odense, the police, according to Ritzau.

The status is unknown.

We are looking for an offender at the moment, said the guard commander at the 16-time Ritzau.

We have plenty to look for right now, so we can not say more.

Haaretz is reporting the shooters were Arab youths:

A group of Arab youths opened fire Wednesday evening on a number of Israelis working at a mall in the Danish city of Odenza, some 200 kilometers north of Copenhagen.

The Israelis, who were operating a stall in the shopping center, were lightly wounded in their legs. There is no apparent danger to their lives.

The Foreign Ministery is following the reports closely, and Israelis emissaries in Copenhagen were headed to the site.

UPDATE: The youth decided to shoot 2 people working at a shopping center because they were working at a counter which sold Jewish cosmetics.