Violent confrontations broke out at the Israeli Embassy in London on Sunday as up to 1,500 pro-Hamas supporters protested against Israel’s Gaza campaign. Some protestors were forcibly removed and others were seen with bloodied faces as violence erupted. 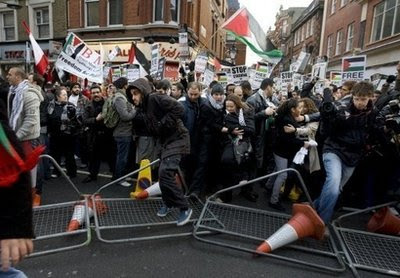 Police arrested three people after a demonstration outside the Israeli embassy in London over the bombardment of the Gaza Strip turned violent Sunday. (AFP/Ben Stansall)

At least 3 people were arrested.

In the thick of it all was Hezbollah supporter, Saddam Hussein supporter, terrorist friend, Taliban supporter and Barack Obama supporter (of course), pussy, George Galloway: