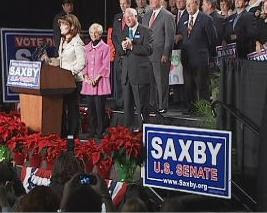 The Augusta Chronicle reported on the Palin-Chambliss rally:

“All of this depends on you tomorrow. Georgia,” she told several thousand gathered this morning at the James Brown Areana. “The stakes are so high. America is depending on you.”

Mrs. Palin said Republicans need to hold the line in the Senate. She said the party offers checks and balances to stop tax hikes, promote conservative energy polices and see the war on terror end with a successful conclusion.

“Saxby has not forgotten who he is serving,” she said.

“He knows we must get government back on your side.”

Mrs. Palin will be traveling the state today to campaign for Mr. Chambliss who faces Democrat Jim Martin in a Tuesday runoff election.

Kathryn Jean Lopez at National Review reported on how the mainstream media is (still) attacking Governor Palin today for campaigning with Chambliss.
Boy, they still hate her!