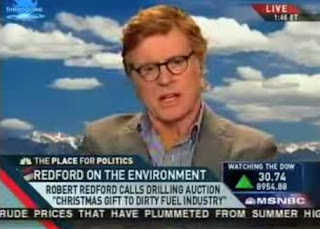 “I think very highly of [Salazar],” Redford stated, echoing sentiments made by Rep. Brian Baird, D-Wash., and other NTHP representatives, all of whom were there to speak out against the possibility of the Bureau of Land Management selling new oil and gas leases around Utah’s Nine Mile High Canyon.

Redford warned that leases around the canyon “need to be stopped.”

“Bush may be a lame duck, but he knows how to quack,” said Redford. He warned: “We should not leave one more debt” of the Bush administration for Obama to fix.

“These lands are part of our legacy … not Cheney’s and Bush’s,” he continued. “[They’ve] been trashing the environment since they came in, like it was their prerogative.”

But he was just getting warmed up: On top of Redford’s criticisms of the Bush administration’s environmental policies, he called Bush “morally criminal” on three separate occasions and said he “was shocked about how devious and sneaky” Bush has been while in office.

Obviously, Redford did not take into account that greenhouse gas emissions have decreased during the Bush years.

He also may want to read up on the Iraqi Marsh Arabs.
President Bush helped revive the marshes of Iraq after Saddam drained them in one of the world’s worst environmental disasters ever.
You can be sure this fact did not come up during the interview.

What’s criminal is that leftists like Redford and his democratic pals have choked off this nation’s energy supply for over 30 years.
That’s morally criminal.