Change you can believe in… 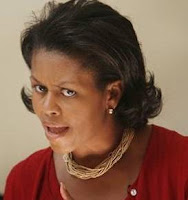 Ace of Spades and No Quarter report that it is very likely that Michelle Obama is the “Specifically Named Individual” on page 64 of the Criminal Complaint against Governor Rod Blagojevich.
From the indictment:

ROD BLAGOJEVICH said that the consultants (Advisor B and another consultant are believed to be on the call at that time) are telling him that he has to “suck it up” for two years and do nothing and give this “motherf***er [the President-elect] his senator. F**k him. For nothing? F**k him.” ROD BLAGOJEVICH states that he will put “[Senate Candidate 4]” in the Senate “before I just give f**king [Senate Candidate 1] a f**king Senate seat and I don’t get anything.” (Senate Candidate 4 is a Deputy Governor of the State of Illinois).

ROD BLAGOJEVICH stated that he needs to find a way to take the “financial stress” off of his family and that his wife is as qualified or more qualified than another specifically named individual to sit on corporate boards.

The “specifically named individual” is Michelle Obama, who was appointed to the Board of TreeHouse Foods, a WAL-MART vendor, on June 25, 2005, even though she did not have experience in the private sector previous to the appointment. Here are the benefits the Obama family received as a result of Michelle Obama’s stint with the WAL-MART vendor:

According to the couple’s tax returns, Mrs Obama earned $51,200 (£25,700) for her work as a non-executive director on Treehouse’s board last year, on top of the $271,618 salary she was paid as a vice-president of the University of Chicago Hospitals.

Not a bad haul for Michelle O, huh?

Related… Here’s Blagojevich explaining the what he is looking for in deciding who will be the next US Senator from Illinois.
…Pure comedy gold!

More Hope and Change… Obama Funneled $1 Million to His Wife’s Hospital & $75,000 to Her Cousin’s Organization