Rendell on Obama: He’s “never been in an executive position before.”
…And it shows. 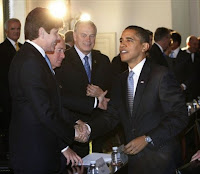 Jammie Wearing Fool has the latest on Blagogate–
Governor Rendell blasted Obama over his weak leadership in handling the Blagojevich scandal.
Yahoo reported:

Pennsylvania Gov. Ed Rendell today criticized Barack Obama for not being more upfront about the Illinois corruption scandal.
Now, he said, the story will continue to dominate the media’s attention.

“They have never been in an executive position before,” Rendell said on MSNBC’s “Morning Joe.” “The rule of thumb is whatever you did, say it and get it over with and make it a one-day story as opposed to a three-day story. Politicians are always misjudging the intelligence of the American people.”

Known for his blunt critiques of fellow Democrats, Rendell did not hold back during the interview…

Actually, he’s not crazy, Ed.
Although this appears to be the recent line by democrats and the liberal media… Rod Blagojevich is perfectly sane.
He’s just your typical Chicago politicion… Like Obama.