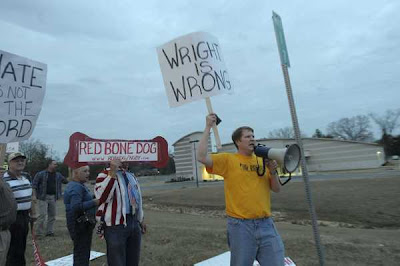 Local radio personality Chris Krok leads a group of about 20 protesters Monday in front of St. Paul AME Church on Shurling Drive in Macon. The protesters were in opposition to the Rev. Jeremiah Wright’s scheduled speaking engagement at the church’s revival. (Macon.com)

Wright silently entered the sanctuary during a choir anthem along with other ministers.

He knelt at the altar to pray while the choir finished singing.

Outside of the church, protestors shouted, “Not G.D. America, God Bless America” and “Jeremiah Wright is wrong.”

They tried to warn people going to hear the sermon that Wright preaches hate, not love.

Wright, speaking to about 350 people, delivered a traditional revival sermon based on the story of Jesus healing a blind beggar on his way to Jerico.

It should come as no surprise that Wright also expressed opinions about politics and current events.

Shouting into the microphone, Wright criticized President George W. Bush, the United States’ declaration of war against Iraq and the media.

He questioned why the military hasn’t been able to find Osama Bin Ladin and the truthfulness of the media and government regarding the war.

“Wake up and smell the oil,” he said…

“He’s harvesting souls for hate. Hate is not of the Lord,” 940 AM morning talk show host Chris Krok shouted through a bullhorn.

Recording devices and cameras were not permitted during Wright’s sermon.