Bummer.
Jesse Jackson Jr. was caught on tape sobbing and hugging Governor Blagojevich at the DNC Convention in Denver this fall.
He’s probably really sobbing after it was reported that Jackson’s supporters were raising $1 million for Hot Rod Blagojevich to get him to appoint Jesse Jr. to the Senate.
And, now this… 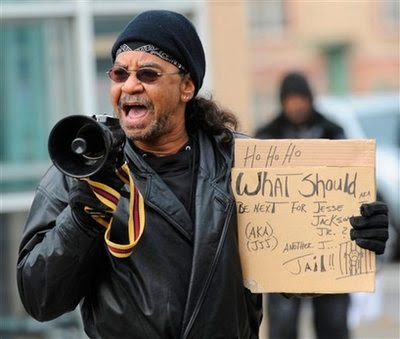 David Jackson yells at drivers during a protest to oust U.S. Rep. Jesse Jackson Jr. outside his office in Chicago, Saturday, Dec. 13, 2008. Allegations have surfaced that an emissary may have offered to raise money for Gov. Rod Blagojevich in exchange for Jackson being appointed to President-elect Barack Obama’s Senate seat. (AP/Paul Beaty)

At least some of his constituents want embattled Congressman Jesse Jackson Jr. to resign.

Protest organizer Harold Davis says he believes allegations that an emissary may have offered to raise money for Gov. Rod Blagojevich in exchange for Jackson being appointed to President-elect Barack Obama’s Senate seat.

Davis says Jackson has tainted the democratic process and his political career is over.

Others in the south side neighborhood disagree. Several passersby shouted support for Jackson and one yelled, “Leave Jesse alone.”