The pro-Hamas British moonbats want the BBC to refer to the security fence as the “apartheid wall.”
The video is here:
(Warning: Moonbat singing)

Pro-Hamas British nutjobs glued themselves to the entrance of the BBC building in protest of the coverage of the Gaza conflict.
Wales Online reported:

Two protesters demonstrating against the BBC’s coverage of the Israeli bombing of Gaza glued themselves to entrance barriers at BBC Wales in Cardiff yesterday.

Bob Cottrell and Dee Murphy, of the Swansea-Palestine link group, were released after causing disruption in the foyer for almost three hours.

Another member of the group, Fiona Williams, claimed the BBC’s coverage of the bombing was pro-Israeli.

She said: “Hamas is referred to as a militant organisation, rather than the democratically-elected government, having been elected by a huge majority.

“The settlements in the West Bank should be referred to as illegal, the Israeli Defence Force as the Israeli Army, and the separation barrier as the apartheid wall.”

A spokeswoman for BBC Wales said: “We’re satisfied that the BBC’s coverage of the events in Israel and the Palestinian Authority has been balanced, fair, accurate and up to the usual BBC standards of impartiality. 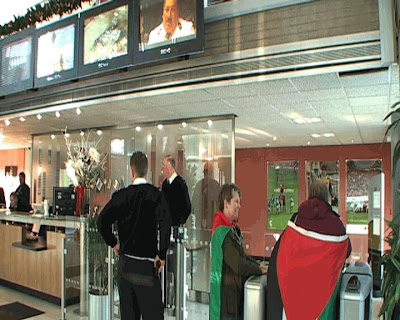 Activist D Murphy said while glued to the gate, “While we hear about rockets being fired from the Gaza Strip into Israel, we rarely hear that this is Palestinian land stolen by Israel.”(UK Indymedia)
Israel pulled out of Gaza in 2005.