OUTRAGEOUS!
A new low for the American media…
The WaPo promotes Muntadar al-Zaidi to hero status and misreports on how his attack on President Bush is being played out in Iraq!

Iraqis demonstrated in the streets Monday demanding the release of the journalist who hurled two shoes at President Bush during a press conference on Sunday, as Arabs across the Middle East hailed Bush’s assailant as a hero who reflected their anger at American policies.

It is not until the 9th paragraph that the Washington Post reports that the only ones protesting in support of al-Zaidi are the followers of anti-American Iranian-backed extremist Muqtada Al-Sadr who holds a minority of influence in the Iraqi Congress.
The Sadrist block holds only 30 seats in the 275 member Parliament.

The rest of the WaPo’s report talks about the response in foreign anti-American regimes and a few individuals on the street in Iraq.
What misleading propaganda!

Unbelievable!
We might as well be getting our news from radical Islamic regimes!

The AFP was no better omitting the fact that it was al-Sadr supporters protesting in Sadr City today: 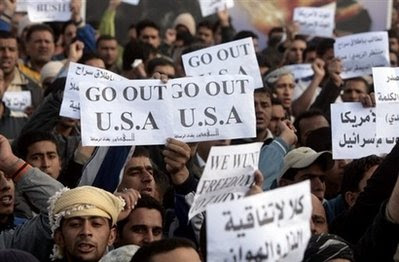 Iraqis hold up signs as they protest against Sunday’s visit by US President George W. Bush and the arrest of an Iraqi journalist in the eastern Baghdad district of Sadr City. Seven members of a single family from the ancient Yazidi religious sect were gunned down in their home as violence continued in Iraq on Monday in the wake of US President George W. Bush’s farewell visit. (AFP/Ahmad al-Rubaye)

No surprise here- The NY Times follows suit…
The New York Times was no better claiming that Muntadar al-Zaidi had not planned to throw his shoes prior to Sunday. However, the AFP reported that one of his colleagues in the Baghdad office of Al-Baghdadia said Zaidi had been planning to throw shoes at Bush if ever he got the chance.

More… The AP joins in the Bush-bashing propaganda.

Voices of Iraq News Agency reported: “To Iraqis, the incident represented a major insult to the U.S. president.”
Unfortunately, you won’t be reading that in the corrupt media today.