Sheik Ubaid urged Barack Obama to use his full name at his swearing in ceremony.
Ubaid said it would help erase “Islamophobia.”
The audio is Here. 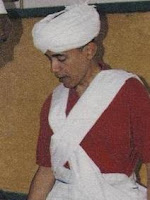 Asking the US President-elect to take oath of the office in his full name, Barack Hussain Obama, a leading Muslim community leader has said this will help in erasing “Islamophobia” from the minds of people.

Addressing a public meeting after Eid-ul-Zuha prayers in New York, Sheik Ubaid has requested US President-elect to take oath of the office using his full name Barack Hussain Obama and bury “Islamophobia” in the “cemetery of other social evils.”

The leader asked Obama to launch a new chapter in the American history in which “racism” and “sexism” are stamped out of public life and human rights of all are respected.

He also said that with “anti-Semitism” already erased from the country, the other major social ill to be defeated is “Islamophobia”.

Well, it looks like Barack Hussein Obama was listening…
The Obama Camp announced today that Barack will will try to “reboot America’s image” among the world’s Muslims and will follow tradition by using his entire name — Barack Hussein Obama — in his swearing-in ceremony.
Obama did not credit Sheik Ubaid for pushing him to make this decision.