CHANGE YOU CAN BELIEVE IN—

“Obviously like the rest of the people of Illinois I am saddened and sobered by the news that came out of the US attorney’s office today… I had no contact with the governor or his office and so we were not, I was not aware of what was happening.”

Barack Obama
After the Arrest of his close friend Governor Blagojevich
December 9, 2008

Of course, David Axelrod appeared on Fox News Chicago on November 23, 2008and said Obama’s “talked to the governor” about his replacement. 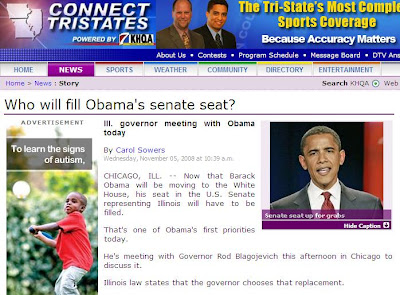 And, Connect Tristates also reported that Obama was meeting Governor Blagojevich on Wednesday November 5, 2008 to discuss his senate seat:

Now that Barack Obama will be moving to the White House, his seat in the U.S. Senate representing Illinois will have to be filled.

He’s meeting with Governor Rod Blagojevich this afternoon in Chicago to discuss it.

Here’s more on that meeting with Obama from the governor’s website on November 5, 2008, where the two discussed Obama’s senate seat: 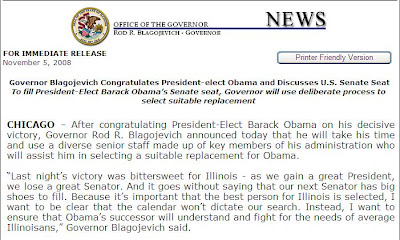 From the governor’s press release:

Later in the day on November 5, 20008, Blagojevich held a news conference to talk about Barack Obama’s replacement in the US Senate: 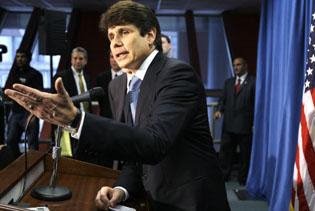 HotAir has more thoughts on the reported November 5th meeting.

UPDATE: STACLU found another article from November 8th that said they met.

UPDATE: It looks like the November 5 story at KHAQ in advance of the Obama-Blago meeting is no longer available at KHAQ’s site.
It’s a good thing that I posted screen grabs of the article.

UPDATE 2: According to World Net Daily KHQA-TV retracted its story about the Blagojevich and Obama meeting in Chicago.
Hat Tip Cathy

UPDATE 3: The Chicago Tribune also reported that Obama and Blagojevich met to discuss the senate seat.