Hopey, Changey, we can believe in. 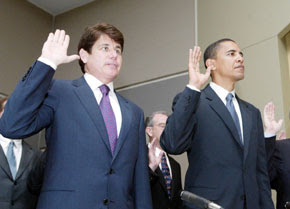 Rahm Emanuel said that he and Obama were top advisors to Blagojevich during his run for governor. The Roaring Republican reported:

Ryan Lizza reported in the New Yorker that Obama received “his first high-level experience in a statewide campaign” while advising Blagojevich during his campaign for governor. Additionally Rahm Emanuel, Obama’s current Chief-of-Staff also was a top strategist for that campaign. From the report:

He and Obama “participated in a small group that met weekly when Rod was running for governor,” Emanuel said. “We basically laid out the general election, Barack and I and these two.” A spokesman for Blagojevich confirmed Emanuel’s account…

But, now Rahm Emanuel is singing a different tune and trying to distance himself from Hot Rod:

Emanuel told the New Yorker earlier this year that he and Obama “participated in a small group that met weekly when Rod was running for governor. We basically laid out the general election, Barack and I and these two.”

Wilhelm said that Emanuel had overstated Obama’s role. “There was an advisory council that was inclusive of Rahm and Barack but not limited to them,” Wilhelm said, and he disputed the notion that Obama was “an architect or one of the principal strategists.”

Of course, Obama and Blagojevich were very close. Why else would Obama work so hard to get him elected?
This is what Obama said about his dear friend in 2002:

On the Chicago TV show “Public Affairs with Jeff Berkowitz” on June 27, 2002, state Sen. Obama said, “Right now, my main focus is to make sure that we elect Rod Blagojevich as Governor, we…”

In 2004, then-Gov. Blagojevich enthusiastically endorsed Obama for the Senate seat after he won the nomination, and Obama endorsed Blagojevich for his 2006 re-election race in early 2005.

More… Blagojevich may have discussed a bribe with Rahm Emmanuel.

Not to worry… The AP is calling it a “distraction” for the president elect.