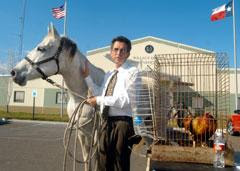 In response to his arrest Guerra parked a motor home in front of the Willacy County Jail and camped for nine days in protest. He also surrounded his campsite with livestock. First he took a goat with two kids that were born the day of his arrest, Guerra said. A day later, he added a rooster. Then he hauled in a white horse along with two bales of hay. Sheriff Larry Spence wondered, “Is he building an ark? It gets weirder every day. I’ve got a barnyard out there now.”

The indictments against Guerra were dismissed last month.

In November, Willacy County District Attorney Juan Angel Guerra brought up charges against Dick Cheney and Alberto Gonzales. The flurry of charges came in the twilight of Guerra’s tenure, which ends this year. Cheney’s indictment on a charge of engaging in an organized criminal activity.
Of course, the Far Left took these charges seriously. Hah!
Today those charges were dismissed.
The AP reported:

A judge dismissed indictments against Vice President Dick Cheney and former Attorney General Alberto Gonzales on Monday and told the southern Texas prosecutor who brought the case to exercise caution as his term in office ends.

Guerra is leaving office at the end of the month after soundly losing in his March primary election.

“I suggest on behalf of the law that you not present any cases to the grand jury involving these defendants,” Administrative Judge Manuel Banales said in court while ruling that eight indictments against Cheney, Gonzales and others were invalid.

He also set a Dec. 10 hearing on whether to disqualify Guerra from those cases.

Even in defeat, Guerra saw the outcome as confirmation of the very conspiracy he had pursued. “I expected it,” he said. “The system is going to protect itself.”