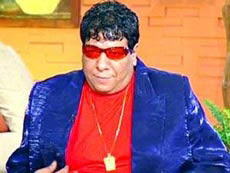 Shaaban Abdel Rahim whose debut song “I Hate Israel” was a smash hit, came out with a new song praising Barack Obama and bashing Bush.

A new song by Shaaban Abdel Rahim, an Egyptian pop singer best known for catchy songs with political lyrics and his outrageously tacky and flamboyant sense of fashion, is making the rounds of the Internet.

Shaaban criticizes President George W. Bush and praises new American President-elect Barack Obama, saying, “I see the smiles and the joy on the faces … provided Obama will not turn out to be like Bush.”

The song goes on to curse Bush for having wasted several years. “People believe that Obama will be like Saladin (Salaheldin in Arabic)…

The singer goes on to say that no matter what Obama will do he will not bring back [former Lebanese Prime Minister Rafiq] Hariri nor [Hamas’s] Sheikh [Ahmad] Yassine. [Hariri was killed in Beirut by a car bomb, which was blamed on Lebanese and Syria; and Yassine was killed in Gaza by an Israeli raid.]

“Arafat will not return, he is dead and everyone knows it is the deed of the Mossad,” says the singer.

“You Arabs are waiting for Obama to take action in your place, to have pity and come to your rescue. You Arabs, neither Bush nor Obama will protect you. Only with your own hands can you protect yourself.”

Shaaban’s music breakthrough came in 2000 with a song titled “Ana Bakrah Israel” (I Hate Israel) accompanied by the catchy refrain “But I Love Amr Moussa.”

Meanwhile… An Egyptian cleric is asking Obama to convert to Islam… or else.

However, Iraqi Shiites aren’t asking Obama to convert.
They believe he’s already a Muslim.
After watching video from the G-damn church he went to for 20 years, you can understand why they’d be confused.