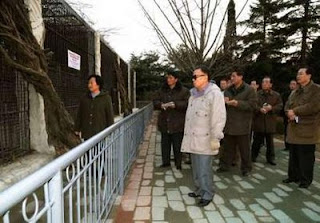 Well, what do you know?
A mysterious unknown son of Kim Jong Il who happens to hold a a powerful position in the North Korean army is reportedly vying for power in North Korea.
He’s 30 and no one has ever heard of him… until now.
The UPI reported:

A previously unknown third son of North Korean leader Kim Jong Il has emerged as a contender for power in Pyongyang, an analyst says.

The son, whose name isn’t known, occupies a powerful position in the North Korean army and could have the backing of the military if there is a power struggle in Pyongyang following the death of the 66-year-old Kim Jong Il, The Daily Telegraph reported Tuesday.

Toshimitsu Shigemura, a professor of international relations at Tokyo’s Waseda University and an expert on North Korean affairs, told the newspaper that the third son, believed to be his 30s, joins Kim’s eldest son, Kim Jong Nam, and the youngest, 28-year-old Kim Jong Chol, as possible successors to “the Dear Leader.”

One Free Korea has the latest health rumors from North Korea.