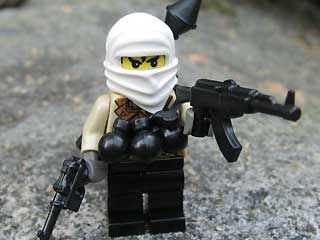 A Lego-style figurine resembling an Islamic terrorist strapped with explosives and made by a small American company has caused an uproar among Muslims and non-Muslims alike.

The controversial miniature figure, created by Seattle-based Will Chapman as part of his BrickArms military fighters line, is a bearded militant with a face-covering hood, a tiny toy assault rifle, a little grenade launcher and plastic bombs that can be attached to an explosives belt.