On the night of Wednesday November 26, 2008, Azam Amir Kasav and his companion opened fire at the Mumbai train station before moving on to Girgaum Chowpatty in a stolen ambulance.

Caught in a car with its tires blown out the Mumbai terrorist was told by the police to come out with his hands up. Instead, the terrorist pulled out a pistol and shot 3 policemen dead. That’s when the Indian crowd decided to do the job the police were meant to do. They beat his a$$ on the street.

Via Sky News.
From the video:

The footage, which was captured on a mobile phone, shows a furious crowd beating the alleged terrorist, Ajmal Qasab (Azam Amir Kasav), before he is taken away.

It allegedly shows him with other gunmen on Marine Drive, a few streets away from the train station where the group had just carried out a killing spree.

Fleeing the scene of the carnage, the gunmen were forced to stop because the tyres of their getaway car had blown out. 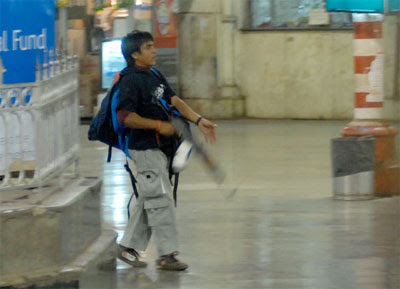 Ajmal Amir Kamal, Azam Amir Kasav, or Azam Ameer Qasab, says he is 21 years old, speaks fluent English, hails from tehsil Gipalpura in Faridkot (or so he says) in Pakistan, and is the only terrorist from this audacious operation to have been captured alive. (India Times)

** Let’s hope they read him his rights before his arrest.

Azam and his fellow terrorists took a trip to Mumbai months earlier posing as Malaysian students.

At least 5 Mumbai locals helped out the terrorists.