Nine Days of Silence–
Have you seen Rahmbo? 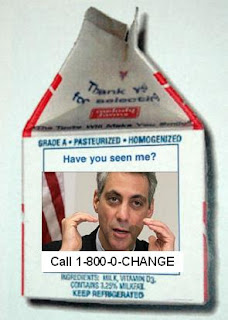 Since the Blagojevich scandal broke and it was reported that the feds have 21 taped conversations of Rahm Emanuel, Obama’s Chief of Staff has suffered from a mysterious case of lockjaw.
Hmm.

UPDATE: The latest news won’t help Rahm any…
The Chicago Sun-Times reported that Emanuel spoke directly to Governor Blagojevich about the senate seat:

President-elect Barack Obama’s incoming chief of staff Rahm Emanuel had a deeper involvement in pressing for a U.S. Senate seat appointment than previously reported, the Sun-Times has learned. Emanuel had direct discussions about the seat with Gov. Blagojevich, who is is accused of trying to auction it to the highest bidder.

Emanuel talked with the governor in the days following the Nov. 4 election and pressed early on for the appointment of Valerie Jarrett to the post, sources with knowledge of the conversations told the Sun-Times. There was no indication from sources that Emanuel brokered a deal, however.

A source with the Obama camp strongly denied Emanuel spoke with the governor directly about the seat, saying Emanuel only spoke with Blagojevich once recently to say he was taking the chief of staff post.

But sources with knowledge of the investigation said Blagojevich told his aides about the calls with Emanuel and sometimes gave them directions afterward. Sources said that early on, Emanuel pushed for the appointment of Jarrett to the governor and his staff and asked that it be done by a certain date.

Not good news for Rahmbo.
It’s likely Rahm won’t much like being tossed under the bus.

Redstate sees the fingers of Rahmbo.