Joe the Plumber said in an interview with Glenn Beck yesterday that some of the things John McCain said “appalled me” but that the thought of Barack Obama as president scared him even more.
FOX News reported:

‘Joe the Plumber’ told conservative radio host Glenn Beck on Tuesday that he felt “dirty” after hitting the campaign trail with Republican presidential nominee John McCain and “seeing some of the things that take place,” Politico reported.

Joe Wurzelbacher said he was specifically put off by McCain when it came to talk of the $700 billion bailout.

“When I was on the bus with him, I asked him a lot of questions about the bailout because most Americans did not want that to happen,” Wurzelbacher told Beck. “I asked him some pretty direct questions. Some of the answers you guys are gonna receive they appalled me, absolutely. I was angry. In fact, I wanted to get off the bus after I talked to him.”

Wurzelbacher said he stayed on the trail with McCain “honestly, because the thought of Barack Obama as president scares me even more.”

“Sarah Palin is absolutely the real deal,” he said.

And, by the way… Joe was right.
Barack Obama was taking his policies directly from the communist party platform.
Sweetness and Light noticed that Barack Obama’s campaign promises exactly matched the hopes and dreams of the Communist Party of the United States: 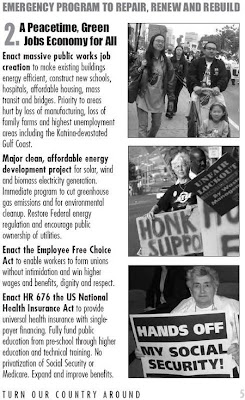