Jesse Jackson Jr. said in his news conference yesterday that he hadn’t met with Governor Rod Blagojevich in 4 years.
Well, except for that time he hugged him on stage a couple of months ago sobbing like a baby. 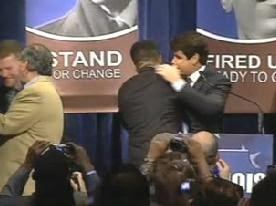 NewsBusters reported that there is a video of a sobbing Jesse Jackson, Jr. embracing Blagojevich just last August at a breakfast of the Illinois delegation to the Democrat Nation Convention in Denver.
Jesse is sobbing so hard he had to stop several times to regain his composure:

…Blubbering like a baby!
Here’s another video version of the sobfest at the Chicago Tribune.

So, besides the sobbing hug he gave him, Jesse hasn’t met with Hot Rod in 4 years.
Maybe.