Iraqi Reporter Throws Shoe At Bush… Perino Gets Hit By Microphone
The reporter works for a Cairo-based Iraqi TV station al-Baghdadiya which tends to be an anti-American channel.
Obviously, he works for a Sunni channel and most likely was upset that the killer Saddam is gone and dead.

Funny. This never happened at a Saddam palace before?
While President Bush was speaking in one Saddam’s palaces today an Iraqi reporter threw a shoe at him. The man was dragged from the room screaming.

Here’s the video– If Bush wouldn’t have ducked he would have been hit:

It may take a couple of minutes to load, via FOX News. 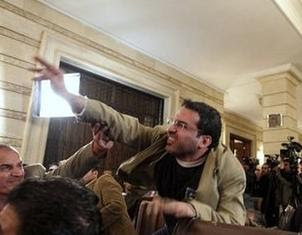 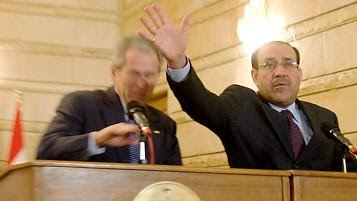 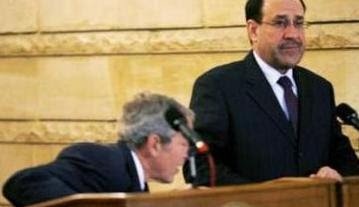 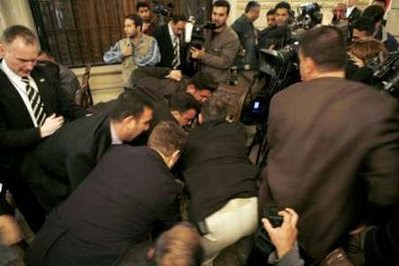 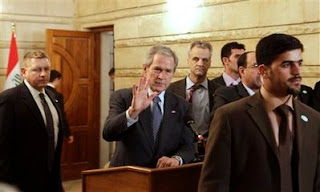 President George W. Bush reacts after a man threw shoes at him during a news conference with Iraqi Prime Minister Nouri al-Maliki on Sunday, Dec. 14, 2008, in Baghdad. (AP)

President Bush joked about the incident and the press conference continued.
The AP has more on the incident:

A man threw his shoes at President George W. Bush and was dragged away by security officials during the president’s farewell trip to Iraq.

Bush ducked and wasn’t hit by either shoe. Bush joked, saying that all he can report was that it was a size 10 shoe. then calmly took questions.

Other Iraqi journalists apologized for the incident.
Reuters reported:

The shoes missed their target about 15 feet away. One sailed over Bush’s head as he stood next to Maliki and smacked into the wall behind him. Bush smiled uncomfortably and Maliki looked strained.

“It doesn’t bother me,” Bush said, urging everyone to calm down as a ruckus broke out in the conference room.

When asked about the incident shortly after, Bush made light of it. “I didn’t feel the least threatened by it,” he said.

Other Iraqi journalists apologized on behalf of their colleague, a television journalist.

No, it was not David al-Gregory or Keith Mohammed al-Olbermann.

The reporter Muntadar al-Zeidi, is a correspondent for Al-Baghdadia television which is an Iraqi-owned station based in Cairo, Egypt.
White House Press Secretary Dana Perino was hit by a microphone during the scuffle and may have a shiner.

UPDATE 2: Al-Baghdadia News Channel is demanding that their Sunni reporter be released. They say his “freedom of speech” has been violated.
Note: This comes from a TV channel based in Cairo!

I think quite a number of Iraqis were embarassed by how their guest got treated today. Personally, I got angry. Very angry.

I will make a public promise: should I ever run into a certain reporter called Muntather al-Zaidi, presently of Al-Baghdadia TV, I will seriously consider beating the crap out of him. If I am successful in bringing him down, then my coup de grace shall be to take one of his shoes, preferably the one on the right, and stuff it in his mouth. I know that will be illegal. I am willing to face all the legal consequences, and the tribal ones too. But as I said, I will give it serious consideration. And should it come to light that someone had put him up to it, paid him or cajoled him into doing it, then they too will get the same treatment. I’m not cut out to be a thug, but I will try anyway.lockquote> UPDATE 4: Of course, we have an idea what al-Zaidi would be going through right now if he were held in an Egyptian prison.