The regime even has an online signup page for would-be suicide bombers: 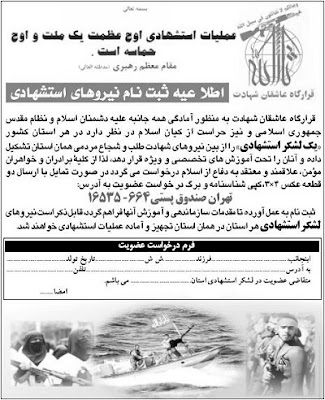 A copy of the suicide signup form was posted at Iran Press News.
Hat Tip Banafsheh

Hard-line Iranian student groups have asked the government to authorize volunteers to go carry out suicide bombings in Israel in response to the Israeli assault on the Gaza Strip.

The government of President Mahmoud Ahmadinejad had not responded to the call by Wednesday. Five hard-line student groups and a conservative clerical group launched a registration drive on Monday, seeking volunteers to carry out suicide attacks against Israel.

In an open letter to Ahmadinjead, the students said “volunteer student suicide groups … are determined to go to Gaza. You are expected to issue orders to the relevant authorities in order to pave the way for such action.” A copy of the letter was made available to The Associated Press on Wednesday.

Maybe they should practice at home first.

The regime in Iran also says 20,000 martyrs signed up to fight Israel this week.