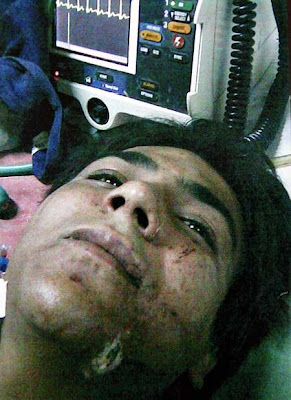 The killers were jacked up on cocaine and LSD for the attacks.

Mumbai officials will administer a “truth serum” to the lone surviving terrorist to extract information from him.
The Daily Times reported

Indian police interrogators are preparing to administer a “truth serum” on the sole Islamic militant captured during last week’s terror attacks on Mumbai to settle once and for all the question of where he is from.

The mystery of the man dubbed “the baby-faced gunman” has weighed heavily on India’s relations with Pakistan as the nuclear-armed neighbours dispute each other’s accounts of his origin.

Police interrogators in Mumbai told The Times that they have “verified” that Azam Amir Kasab, who was captured after a shoot-out in a Mumbai railway station on Wednesday night, is from Faridkot, a small village in Pakistan’s impoverished south Punjab region. They say that the nine dead gunmen are also Pakistani.

Disputing that account, President Asif Ali Zardari of Pakistan told CNN last night: “We have not been given any tangible proof to say that he is definitely a Pakistani. I very much doubt it … that he is a Pakistani.”

He added: “The gunmen plus the planners, whoever they are, [are] stateless actors who have been holding hostage the whole world.”

Proof that the militants were Pakistani would rapidly escalate the pressure on Mr Zardari’s government to take action or risk a backlash from allies including the United States.

Police interrogators in Mumbai told The Times that they are poised to settle the matter of Kasab’s nationality through the use of “narcoanalysis” – a controversial technique, banned in most democracies, where the subject is injected with a truth serum.

The method was widely used by Western intelligence agencies during the Cold War, before it emerged that the drugs used – typically the barbiturate sodium pentothal – may induce hallucinations, delusions and psychotic manifestations

Mumbai police said that their evidence of a Pakistan link includes hand grenades manufactured in the city of Rawalpindi, in Pakistan, and satellite phone calls traced back to the country. 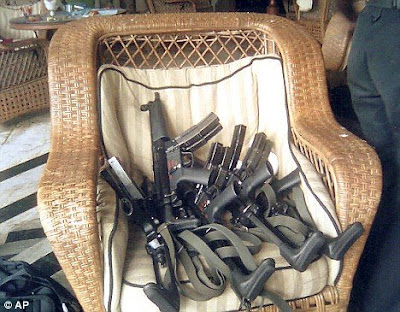 Anatreptic reported that this picture, taken in the aftermath of the Mumbai terror attacks, are Heckler & Koch MP5s. These are the standard submachine gun of security services throughout the world and are likely linked to the Pakistani Ministry of Defense.

UPDATE: The Mumbai terrorist killers used a US hosted website.