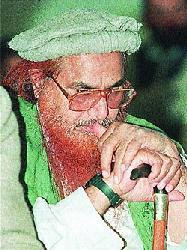 India wants Pakistan to turn over the leader of Lashkar-e-Taiba, Hafeez Sayeed, (pictured) who they say played a role in the Mumbai terrorist attacks.

India has proof that the terrorists who killed 178 in Mumbai last week were trained by the Pakistani Intelligence Agency!
NDTV reported, via Free Republic:

India has proof that the Pakistan’s intelligence agency ISI was behind the deadly Mumbai attacks. Sources have told NDTV that ISI trained the attackers.

The names of trainers and the places where meticulous training took place are also known to the government, the sources said.

The United States is believed to have even more evidence some of which it has shared with India, they said.

The US has told Pakistan that they have proof of terrorist outfit Lashkar-e-Taiba’s role and sought the arrest of its chief Hafeez Sayeed (Hafiz Saeed).

Sources added it is hard to imagine that Pakistan army was not aware of Mumbai attack plan. They say Pakistan President Asif Ali Zardari is not fully in control and the ISI and army are calling the shots.

Afghan’s Ambassador to the US repeated the charge adding that calls made by the terrorists during the operation were to known ISI members.
The Press Trust of India reported:

Adding to the suspicions of Pakistan’s ISI being linked to the Mumbai terror attacks, Afghanistan said intelligence gathered after the carnage has linked the agency to the unprecedented strike.

Calls were placed from a satellite phone left behind by the attackers to “people who were known ISI members or had very strong ties with the ISI,” Afghanistan’s Ambassador to the US T Jawad told the Wall Street Journal.

Jawad also said there is evidence linking Yusuf Muzammil, the man identified by India as the attacks’ chief organiser, to the ISI, but did not provide details.

Meanwhile, the journal in an analytical piece said the US’s insistence that Pakistan take strong action against those responsible for the Mumbai terror attacks has “aligned” Washington more closely with the Indian position, but it is unlikely to coax Islamabad to oblige.

India has demanded the immediate extradition of 20 terrorist suspects sheltering in Pakistan, including the LeT leader Hafeez Sayeed.

Related news… The lone surviving Mumbai terrorist said he was promised that his impoverished family would get $1,250 if he died fighting for militant Islam.