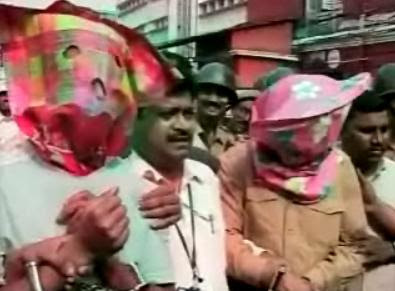 The men illegally bought phone cards used by the terrorists in the Mumbai attacks.
Video of the arrested men is HERE.
The AP reported:

It was not immediately clear whether the two had prior knowledge of the attacks, which killed 171 people. If they did, the arrests could represent evidence of homegrown ties to the attacks and be a blow to Indian officials who have blamed the massacre entirely on Pakistani extremists.

Police said another Indian citizen who was arrested in February in northern India carrying hand-drawn sketches of hotels, the train terminal and other sites that were later attacked was being brought to Mumbai for renewed questioning.

UPDATE: Authorities reported that one of the two Indian men arrested may have been working undercover for the Indian government.
Sky News reported:

A man arrested in connection with the Mumbai terror attacks is a counter-insurgency police officer, authorities say. Skip related content

Two men were taken in by police for illegally buying mobile phone cards that were used by the gunmen in the recent hotel atrocities.

A senior police official has now told the AP news agency that one of the pair is a counter-insurgency officer who may have been on an undercover mission.

He named the officer as Mukhtar Ahmed and he is being held by police in Calcutta.