A report by Comscore released in October says that Huffington Post beat Drudge Report in traffic during this year’s election cycle. 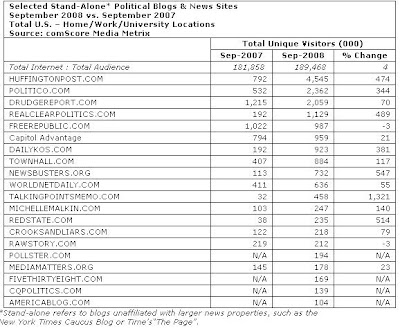 Click to Enlarge
It is interesting that HotAir, Power Line, Ace of Spades and Instapundit are not included on this list.
What gives?

The Drudge Report took a back seat to Huffington Post in 2008(?)
The Sun-Herald reported, via Free Republic:

The Wall Street Journal recently reported an important effect of the 2008 presidential campaign: For the first time, traffic at left-leaning political Web sites overtook traffic at right-leaning competitors. The Drudge Report and Free Republic had the largest number of unique visitors in September 2007, but in September 2008, that honor went to the Huffington Post.

Political strategists have been analyzing the impact of the Internet on American political communication since at least the mid-1990s. When Hillary Clinton complained in 1998 about a “vast right-wing conspiracy,” she was drawing on a 332-page study done by the 1995 Clinton White House alleging that a “right-wing conspiracy industry” was moving anti-Clinton material from Web sites in the United States to conservative papers in Britain and then back to mainstream U.S. print publications.

That 1995 report, and Clinton, too, were right on one point: The earliest significant impact of the Internet on political communication did come from the right.

Drudge was founded in 1994 and Free Republic in 1996. MoveOn was created in 1998 – precisely to respond to online anti-Clinton efforts – but it didn’t gain real prominence until 2003, when George Soros invested. The other major left-leaning sites appeared after George W. Bush’s election: Democratic Underground in 2001, Daily Kos in 2002 and Huffington Post not until 2005.

The Drudge Report currently has 25 million visitors each day.
Someone will have to explain this study to me.