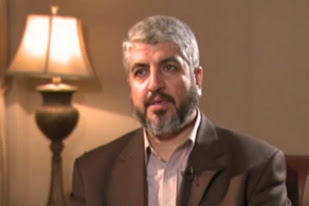 Hamas leader Khaled Meshal says that Hamas had accepted “all the peaceful options, but without results.” (Aljazeera)

The leader of the terrorist organization Hamas, Khaled Meshal, called for a 3rd intifada against Israel including suicide bombers.
Aljazeera reported:

Khaled Meshaal, the political leader of Hamas, has called for Palestinians to wage a new intifada against Israel, including a return to suicide missions.

In an interview on Al Jazeera, Meshaal said: “We called for a military intifada against the enemy. Resistance will continue through suicide missions.”

Meshaal’s call came after Israel hammered Hamas targets in the Gaza Strip, killing at least 220 people in one of the bloodiest days of the decades-long Middle East conflict.

Meshaal said Hamas had accepted “all the peaceful options, but without results.”

He said that for there to be any talks with the people of Gaza, “the blockade must be lifted and the crossings [from Israel] opened … notably that in Rafah,” which leads to Egypt.