Not everyone is happy with Mahmoud. 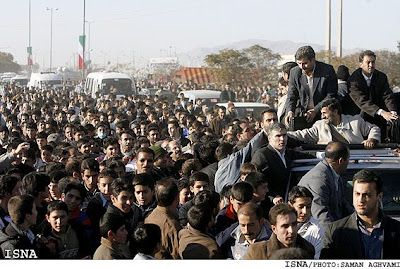 While approximately six months remain until the tenth presidential election in Iran and ‎the supreme leader of the country has explicitly supported incumbent Mahmoud ‎Ahmadinejad many times in the past few months, a conservative website revealed that ‎several grand ayatollahs in Qom, and some clerics from Tehran, have sent messages to ‎supreme leader ayatollah Khamenei voicing their disappointment with the Ahmadinejad ‎administration. ‎

The website Tabnak, which belongs to former Passdaran Revolutionary Guards ‎commander and current deputy head of the powerful Expediency Council (led by ‎Hashemi Rafsanjani) Mohsen Rezaei, reported yesterday under the headline “Messages ‎and Disappointment of Clerics with Some Administration Measures” that “several top ‎clerics from Tehran and Qom have made remarks to the Islamic Republic supreme leader ‎voicing their criticism of some of the ninth administration’s measures.” ‎

Tabnak’s report does not specifically mention any names, but it is accompanied by the ‎pictures of three conservative grand ayatollahs residing in Qom: Makarem Shirazi, Nouri ‎Hamedani and Safi Golpaigani.

Iran has highest inflation rate in the Middle East, reaching 24.3% this year. The country’s trade deficit is nearly $40 billion. Iran’s non-oil exports reached $15.6 billion, which was largely off pace with its $56.5-billion imports. The economic policies of Iranian President Mahmoud Ahmadinejad, many say, have exacerbated that inflation problem with favoring low interest rates to help small businesses and the poor- Iran VNC.