Yusef Mohammed al-Hajj Dib was described by friends as being a normal person “until he became more religious.”
Yusef was not happy with the decision: 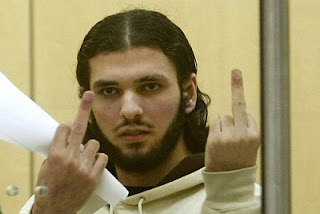 Yusef Mohammed al-Hajj Dib was not happy with the outcome to his trial. (ROP)

Yusef Mohammed al-Hajj Dib was sentenced this week for the botched German train bombing in July 2006.
The AFP reported:

A Lebanese man was sentenced to life in prison Tuesday for a failed plot to blow up German passenger trains which the court said could have triggered “a bloodbath of monstrous proportions.”

The regional superior court in this western city convicted Yusef Mohammed al-Hajj Dib, 24, of multiple counts of attempted murder for his part in an attempt to attack two regional trains packed with travellers in July 2006.

A life sentence in Germany generally amounts to 15 years in prison. Dib’s attorney said he would appeal the verdict.