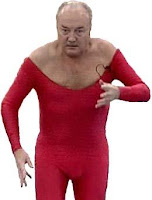 Press TV, a 24-hour English language news channel, is set to give British viewers a genuine alternative to the western establishment consensus when it launches on Sky on December 1. The broadcaster, whose headquarters is in Tehran but which has bureaux in all major world capitals, will go out on Sky Channel 515 adding to its global footprint via a dozen other satellites and its website. Press TV offers in-depth analysis of news and current affairs especially focusing on the Middle East.
…
Press TV has signed a number of politically diverse and high-profile presenters including MPs George Galloway and Derek Conway, broadcast personalities Nick Ferrari and James Whale, and political journalists Andrew Gilligan, Yvonne Ridley and Lauren Booth.

Harry’s Place adds that Iran Press TV invites neo Nazis to participate in programmes about Jews and publishes Holocaust denial.
It ought to be a perfect fit.
Via LGF