Well wonder of all wonders…
A top Democrat donor was just busted in what looks like the largest fraud case in US history.

Bernard L. Madoff, a former chairman of the Nasdaq Stock Market and a force in Wall Street trading for nearly 50 years, was arrested by federal agents Thursday, a day after his sons turned him in for running what they said their father called “a giant Ponzi scheme.”

The Securities and Exchange Commission, in a civil complaint, said it was an ongoing $50 billion swindle, and asked a judge to seize the firm and its assets. “Our complaint alleges a stunning fraud that appears to be of epic proportions,” said Andrew M. Calamari, associate director of enforcement in the SEC’s New York office.

In a separate criminal complaint, Federal Bureau of Investigation agent Theodore Cacioppi said Mr. Madoff’s investment advisory business had “deceived investors by operating a securities business in which he traded and lost investor money, and then paid certain investors purported returns on investment with the principal received from other, different investors, which resulted in losses of approximately billions of dollars.”

Bernard L. Madoff loves his democrats.
And, he’s a big fan of Charles Rangel, too: 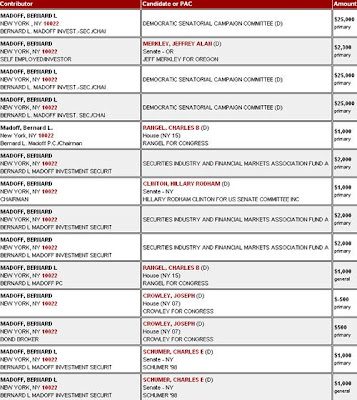 Click to Enlarge
Madoff may have been running the biggest fraud operation in US history.

Jim Hoft
Jim Hoft is the founder and editor of The Gateway Pundit, one of the top conservative news outlets in America. Jim was awarded the Reed Irvine Accuracy in Media Award in 2013 and is the proud recipient of the Breitbart Award for Excellence in Online Journalism from the Americans for Prosperity Foundation in May 2016.
Rep. Matt Gaetz Calls for Election Bribery Probe Against Mike Bloomberg for Paying Florida Felons' Fines for Biden Votes
Federal Election Commission Releases List of Topics for First Debate in Order to Assist Joe Biden
Facebook Censors The Gateway Pundit Exclusive Report by Joe Hoft -- Police Found Crack Pipe on George Floyd Is Labeled "Harassment and Bullying"
Body Language Expert Insists Joe Biden Is Using Earpiece Assistance During CNN Town Hall --VIDEO
DEVELOPING: Mike Bloomberg Is Likely Breaking Federal Law by Paying off Felon Debts for Democrat Votes (VIDEO)
See more...