If the Hsu fits…
It’s still weeks away from the inauguration and already Barack Obama is linked to two high profile scandals.
First it was the Blago Scandal.
Now, it’s the Hsu Scandal– 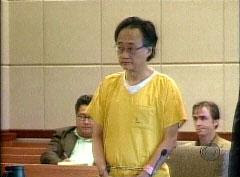 In addition to the Rod Blagojevich pay-for-play probe, Obama could figure in the upcoming fraud trial of Norman Hsu, the disgraced Democratic fundraiser who was charged last year with operating a $60 million pyramid scheme. According to investigators, Hsu, a major Hillary Clinton fundraiser, pressured investors to donate money to political candidates with whom he was aligned. In a letter last week to U.S. District Court Judge Victor Marrero, Hsu’s lawyer, Martin Cohen, requested a 60-day delay in the start of Hsu’s trial, scheduled to open January 12 (Cohen cited the “extraordinary level of negative publicity” generated by the recent arrest of alleged Ponzi schemer Bernard Madoff).

In his December 22 letter, Cohen also noted that Hsu was already “notorious for his political activities” and that it was “inevitable” that his client’s “connections” to Bill and Hillary Clinton “and other democratic notables–including perhaps the president-elect–will be introduced at trial.” Before becoming a key fundraiser for Hillary Clinton’s presidential bid, Hsu co-hosted a 2005 California fundraiser for Obama’s political action committee and introduced the Illinois Democrat to Marc Gorenberg, a Silicon Valley venture capitalist who later joined the Obama campaign’s national finance committee. Prosecutors allege that Hsu directed his investors to donate money to specific candidates, and then reimbursed them in violation of federal campaign laws.