It snowed in New Orleans today. 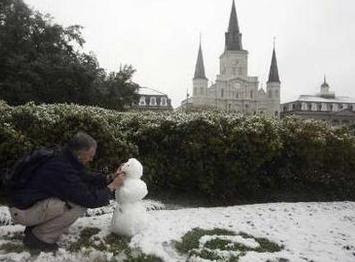 A man makes a snowman in front of St. Louis Cathedral in the French Quarter, as snow falls in New Orleans, December 11, 2008. (REUTERS/Sean Gardner)

The oceans have been cooling since 2003.
Sea ice is growing at the fastest pace on record.
A rare 50 year arctic blast is cooling the west coast.
There are growing fears of a coming freeze worse than the ice age.
Alaskan Sea Glaciers are advancing for the first time in 250 years.
And, for the second straight year the Earth is, in fact, cooling… not warming.

This US Climate Map October 2007-November 2008 shows that temperatures are well below normal throughout the US this year.

But, facts don’t matter to the Global Warming Religionists.

Hopes of laying a solid foundation for a post-Kyoto climate pact in 2009 are diminishing, as representatives from 189 nations gathered in Poznań, Poland, squabble over financing methods.

Delegates met for the two-week COP14 talks held in the western Polish industrial city hope to set the stage for a successor to the 1997 Kyoto Protocols, which expire in 2012. The details of the new climate pact are set to be agreed upon in December 2009 in Copenhagen, Denmark.

But the current talks, which close Friday, are proceeding more slowly than expected, casting into doubt hopes of a comprehensive climate treaty next year: “We’re working under a very tight timeline,” said UN climate chief Yvo de Boer, according to Bloomberg’s Alex Morales. “I don’t think where we are now it is going to be feasible to develop a fully elaborated, long-term response to climate change in Copenhagen.”

Even if the resulting deal from Poznań lacks specifics, says Mr. de Boer, it could still give participants something to work with. “My sense is that we should be careful not to reach too far and achieve nothing,” de Boer told Bloomberg. “What we need to reach in Copenhagen is clarity on the key political issues so that everything after Copenhagen is settling the details and not negotiating fundamentals.”

…According to Reuters, the United Nations will ask developed countries to contribute $1 billion for urgent projects in the poorest countries to help them adapt to floods, droughts, crop failures, and other impacts of global warming. So far, rich countries have committed only $172 million, with Germany, Denmark, Britain, and the Netherlands kicking in the most. The United States has yet to contribute any money.

Another Reuters story notes that the Chinese government, which is proposing that industrialized countries give 1 percent of their national wealth annually to help poor countries with adaptation and clean-energy development, is accusing rich countries of planning “a great escape” out of committing to specific emissions targets by dragging their feet in climate talks.

Gee, you think that might be a Marxist ploy?
Hopefully they’ll wrap this one up before any more funds are committed.