Change You Can Believe In…
On November 10, 2008, Governor Rod Blagojevich held a 2-hour long conference call with Obama advisors in Washington DC discussing the sale of the Illinois Senate Seat.
This is the same call where Blags famously uses profanity to refer to his good friend, Barack Obama, “F— him. For nothing? F— him.”
Lovely.
The Wall Street Journal reported:

The call lasted about two hours. On the phone were Mr. Blagojevich, his wife, his general counsel, an unnamed adviser, and John Harris, the governor’s chief of staff and his co-defendant in this week’s case.

But what’s drawing the most interest is who was on the line from Washington, and the sequence of political events that followed that same night and in the ensuing days regarding Barack Obama’s close friend and adviser, Valerie Jarrett.

According to the FBI, there were “various Washington, D.C., based advisers” on the call with Mr. Blagojevich & Co., although the Washington callers are not named. The FBI also said participants popped on and off the line throughout the conversation.

During the call, Mr. Blagojevich and those closest to him allegedly detailed virtually every one of their ideas for turning Mr. Obama’s open Senate seat into something valuable. Specifically, the governor asked “what he can get from the President-elect for the Senate seat,” the FBI alleged, adding later that callers talked about how to “monetize” Mr. Blagojevich’s connections.

Mr. Blagojevich also bemoaned what he called his financial struggles, although his post reportedly pays about $177,000 per year. “The immediate challenge,” the governor allegedly said, “[is] how do we take some of the financial pressure off of our family.”

Page 65 of the criminal complaint: 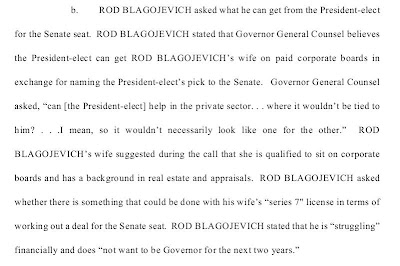 Callers discussed the possibility of ambassadorships, which are made by the president. They talked about an appointment for Mr. Blagojevich as head of the Department of Health and Human Services, also made by the president. They explored the idea of getting Mr. Obama to use his clout to put the governor’s wife on corporate boards. And they discussed a deal involving the Service Employee International Union, which would be asked to install Mr. Blagojevich over one of its top political groups in exchange for the union getting to tell Mr. Obama that it was delivering the open U.S. Senate seat to his favorite candidate.

On page Page 67 of the criminal complaint Blagojevich made it clear to the Washington Obama advisors that he expected something in return for the selection: 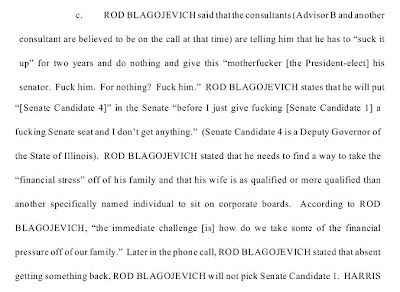 Click to Enlarge
This is a damning piece of evidence from that conversation:

** The Smoking Gun states that, “Additionally, Rahm Emanuel, the incoming White House chief of staff, is referred to in the affidavit as “President-elect Advisor.”

No wonder Rahm Emanuel is keeping quiet since the story broke!
This scandal has not even started to unravel yet.

More… Jennifer Rubin has more on Rahm and Blags at Commentary Magazine:

Mr. Emanuel was among the few people in Mr. Obama’s circle who occasionally spoke to Mr. Blagojevich. He declined to answer questions on Wednesday, waving off a reporter who approached him as he walked across Capitol Hill.

A Democrat familiar with Illinois politics and the Obama transition, who spoke on the condition of anonymity, said there probably were calls between the Blagojevich and Obama camps about the Senate seat. It was not clear if any calls were recorded by federal agents, who had tapped the governor’s phones.

Team Obama did have contact with Team Blagojevich recently, and
Obama is not making a firm denial of wrong doing. Instead he is expressing ‘confidence’ there was no wrong doing.