President Bush announces that we are well on our way to winning in Iraq. 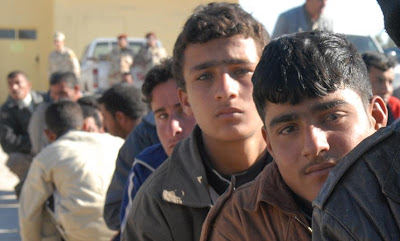 Local Iraqi nationals wait in line in order to register themselves as members of the Sons of Iraq while at a registration station set up by coalition forces and the Iraqi army at Forward Operating Base Gabe, located in Diyala, Iraq, Dec. 4. Over 300 local Iraqi nationals showed up for the registration which was jointly put together by coalition forces and the Iraqi army. (DVIDS)

President Bush took time to thank the troops and announced today that we are well on our way to winning the War in Iraq.
From the President’s Radio Address:

Throughout the past eight years, I’ve seen the tremendous talent and courage of those who wear the uniform.

Their efforts have overthrown tyrants, made our Nation safer, put terrorists on the run, and opened the door to liberty for more than 50 million people. And now, thanks to their work in Iraq and the courage of the Iraqi people, a hopeful new era is dawning for their democracy and ours.

Earlier this week, Iraq’s Presidency Council approved two landmark agreements that will solidify Iraq’s democratic gains, affirm its sovereignty, and put its relations with the United States on a strong and steady footing.
The first agreement that America and Iraq have signed is called a Strategic Framework Agreement. This pact sets out a common vision for U.S.-Iraqi relations in the years ahead. Under this agreement, we will work together to bring greater stability to Iraq and the region. We’ll promote trade and investment between our nations. And we will support Iraq’s leaders and their citizens as they strengthen their democratic institutions.

Only a few years ago, such an agreement was unimaginable. Chaos and violence were consuming Iraq. Terrorists were seizing new ground and using violence to divide the Iraqi people along sectarian lines. And the nation was nearing the point of political collapse and civil war.

Today, violence is down dramatically. Our forces have struck powerful blows against al Qaeda. The Iraqi military is growing in capability, taking the lead in the fight against the extremists, and working across sectarian lines. Sunni, Shia, and Kurdish leaders are sitting together at the same table to peacefully resolve their differences and chart their country’s future. And there is hope in the eyes of young Iraqis for the first time in many years.

The second agreement that America and Iraq have signed is a Security Agreement, known as a Status of Forces Agreement. One of the primary purposes of this agreement is to ensure protection for our troops and Defense Department civilians as the Iraqi government begins to exercise greater sovereignty. Our military commanders have assured me that the agreement’s provisions meet this purpose. At the same time, it also respects the authority of the Iraqi government. And it lays out a framework for the withdrawal of American forces in Iraq — a withdrawal that is possible because of the success of the surge…

As we enter this new phase in America’s relations with Iraq, we have an opportunity to adopt a new perspective here at home. There were legitimate differences of opinion about the initial decision to remove Saddam Hussein and the subsequent conduct of the war. But now the surge and the courage of brave Iraqis have turned the situation around. And Americans should be able to agree that it is in our Nation’s strategic and moral interests to support the free and democratic Iraq that is emerging in the heart of the Middle East.

The American people have sacrificed a great deal to reach this moment. The battle in Iraq has required a large amount of time and a large amount of money. Our men and women in uniform have carried out difficult and dangerous missions and endured long separations from friends and family. And thousands of our finest citizens have given their lives to make our country safer and bring us to this new day. The war in Iraq is not yet over — but thanks to these agreements and the courage of our men and women in Iraq, it is decisively on its way to being won. 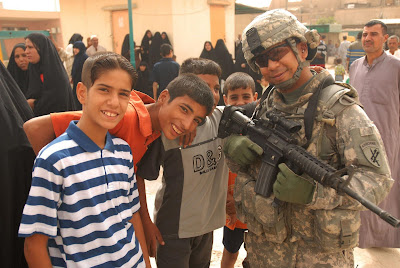 The U.S. Army Reserve Civil Affairs Team, stationed out of Fort Dix, N.J., deployed to Forward Operating Base Falcon, to conduct civil military operations in support of the “Raider” Brigade Combat Team. The company, comprised of five civil affairs teams and a civil military operations center, work to build the civic capacity of local neighborhood and district leadership in the community that is home to approximately 1.6 million Iraqis. (DVIDS)