Shaken to the core… 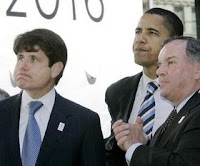 In a Monday, April 16, 2007 file photo, Illinois Gov. Rod Blagojevich, left, U.S. Sen and Democratic presidential hopeful Barack Obama, center, and Chicago mayor Richard M. Daley, right, watch a video during a rally to celebrate the selection of Chicago as the U.S. representative in the international selection process for the 2016 Summer Olympics Chicago. Blagojevich was arrested Tuesday, Dec. 9, 2008 on charges of conspiring to get financial benefits through his authority to appoint a U.S. senator to fill the vacancy left by Barack Obama’s election as president. (AP Photo/Charles Rex Arbogast, File)

“There has been an air of lawlessness around Governor Blagojevich for some time and Judicial Watch applauds U.S. Attorney Patrick Fitzgerald for his actions.

“Blagojevich’s corruption is no surprise, but its breadth and depravity is shocking. The alleged efforts to sell the Senate seat of Barack Obama are outrageous, but also seem to implicate many other powerful politicians and political players. Especially disturbing are the questions the scandal raises about Barack Obama and his close associates.

“This is a burgeoning crisis for Obama that should shake his presidency to its core.

“Did Obama report Blagojevich to investigators about any efforts to sell his Senate seat?”

Judicial Watch has been investigating Rod Blagojevich for over two years and has ongoing open records litigation concerning the sale of government jobs for which he was arrested today. Blagojevich has stonewalled and refused to turn over documents to Judicial Watch that could have alerted the American people to his corruption.

More… The mainstream media is furiously trying to distance Obama from this Illinois nightmare.