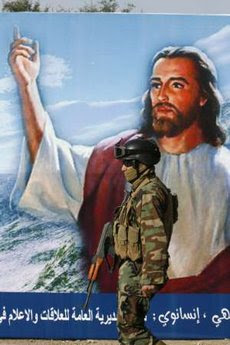 An Iraqi soldier walks in front of a billboard with an image of Jesus Christ during a Christmas festival in Abu Nawas park in Baghdad December 20, 2008. (REUTERS/Atef Hassan) 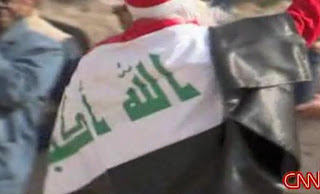 Santa showed up wearing an Iraqi flag on his back. (CNN Video)

The city of Baghdad threw its first ever public Christmas celebration this weekend.
CNN reported:

From a distance, it looks like an apparition: a huge multi-colored hot-air balloon floating in the Baghdad sky, bearing a large poster of Jesus Christ. Below it, an Iraqi flag.

Welcome to the first-ever public Christmas celebration in Baghdad, held Saturday and sponsored by the Iraqi Interior Ministry. Once thought to be infiltrated by death squads, the Ministry now is trying to root out sectarian violence — as well as improve its P.R. image.

The event takes place in a public park in eastern Baghdad, ringed with security checkpoints. Interior Ministry forces deployed on surrounding rooftops peer down at the scene: a Christmas tree decorated with ornaments and tinsel; a red-costumed Santa Claus waving to the crowd, an Iraqi flag draped over his shoulders; a red-and-black-uniformed military band playing stirring martial music, not Christmas carols.

On a large stage, children dressed in costumes representing Iraq’s many ethnic and religious groups — Kurds, Turkmen, Yazidis, Christians, Arab Muslims not defined as Sunni or Shiite — hold their hands aloft and sing “We are building Iraq!” Two young boys, a mini-policeman and a mini-soldier sporting painted-on mustaches, march stiffly and salute. 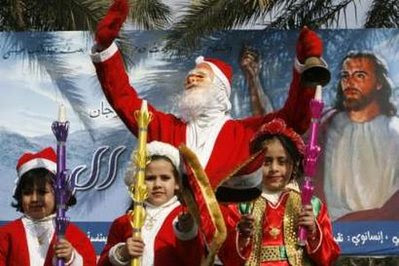