Major Eric Egland, a counter-terrorism consultant to the Department of Defense, is back in Iraq. 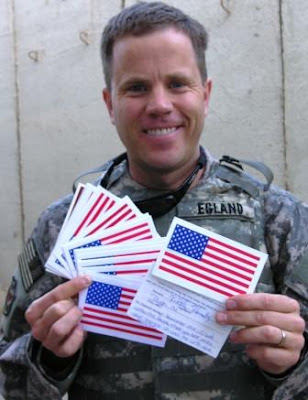 Eric is also the founder of Troops Need You an organization whose mission it is to deliver the resources the troops need to win over the local people in Iraq and Afghanistan. The Troops Need You “Cards for Troops” program has been a stunning success this year.

Major Egland saw first hand in Iraq and Afghanistan that the troops are well equipped to engage in combat, but need the American people to equip them to engage communities. Soldiers and Marines have proven that providing tailored responses to local needs–whether medical supplies, water filtration systems or enough sports equipment to start a soccer league–builds trust and makes the people more willing to stand up, so our troops can stand down and come home–victorious.

Besides his important work in Iraq, Eric is focusing on national security reforms, including making sure wartime earmark abusers face consequences. Eric Egland is launching an assault on backroom contracting deals during wartime. GovExec has more on Eric’s efforts.

Mitchell Wade, the former defense contractor who pleaded guilty to paying $1.8 million in bribes to imprisoned former Rep. Randy “Duke” Cunningham (R-Calif.) will be sentenced on December 15th. Egland is requesting Wade be given maximum sentence because of the lethal consequences of his failures in the Counter-IED Targeting Program. He wrote about that HERE.

Eric wrote Judge Urbina about the seriousness of the case: 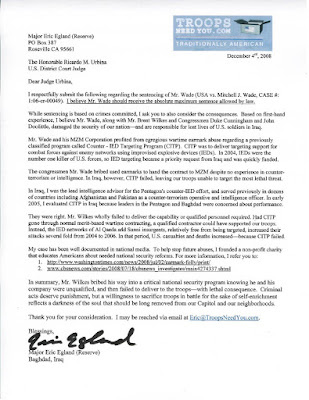 Click to Enlarge
Egland is asking that Wade receive the maximum sentence allowed by the law.
Obviously, Eric feels this case is very important. 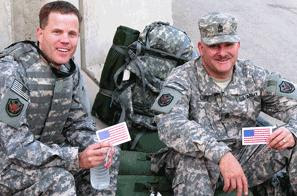 Thanks to you, America, the Troops Need You “Cards For Troops” campaign is a stunning success. Over 5,000 heartfelt, handwritten notes of faith and encouragement are blessing our troops–and boosting their morale. Keep ’em coming!

UPDATE: If you would like to donate to this very worthy organization over the holidays you can do that HERE.