10 terrorists were killed or captured in Mumbai.
…But evidence shows that 15 took part in the attacks!

Meanwhile… The Deccan Mujahadein terrorist group that took responsibility for the Mumbai attacks issued an email threatening to attack New Delhi next. 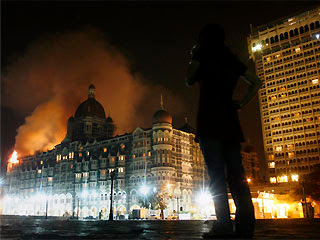 The Taj Majal hotel has became a symbol of the terrorist attacks on Mumbai because of the gunmen who holed up inside so long, killing as many as 150 people. (Reuters)

Five Mumbai terrorists may still be missing and could be roaming the streets of India’s financial capital.
FOX News reported:

Indian security forces are officially claiming that ten militants – nine of whom were killed and one caught alive – were behind a coordinated terror attack that claimed nearly 200 lives.

However, the hijacked Indian fishing boat used by the gunmen to approach Mumbai, the crew of which were also slaughtered, had equipment for 15 men on board when it was discovered adrift off the city shore – suggesting that several gunmen could still be at large.

“Fifteen jackets were found, 15 toothbrushes even,” one police source said. “That more men were involved, is possible.”

The news came as Shakeel Ahmad, India’s Deputy Home Minister, said that all the gunmen found so far were from Pakistan, an allegation that threatened to place further stress on the troubled relationship between the two nuclear powers.

…Mumbai residents suspect that perhaps two dozen gunmen had stormed the city – an impression supported by early police and media reports on Wednesday night when a wave of attacks at at least eight locations rocked Mumbai. Angry at the Government’s response to the crisis, they are reluctant to accept the assurances that all the terrorists are all accounted for.

The terrorists left out of Karachi, Pakistan on November 21.