Moshe’s birthday was Saturday. He was two.
His parents were murdered by terrorists on Wednesday. 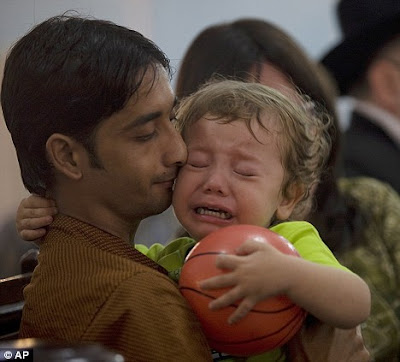 Moshe Holtzberg, the couple’s two-year-old son, cried repeatedly for his mother during a memorial service in Mumbai yesterday. (Daily Mail)

2 year-old Moshe Holtzberg has bruises on his back that indicate he was beaten by the Mumbai terrorists when they broke into the Jewish Chabad Center in Mumbai.
The Daily Mail reported, via LGF:

The Jewish mother murdered in the brutal Mumbai terror attacks last week was six month pregnant, her father revealed today at her funeral.

And Rivkah Holtzberg’s two-year-old son, Moshe, may have been beaten by the militants, reports have claimed.

His back was covered in bruises consistent with abuse, the chairman of Zaka, Israel’s ultraorthodox recovery service, told Sky News.

Today Moshe’s grandfather revealed that his daughter Rivkah had been six months pregnant as he gave a eulogy at her funeral.

Maybe it was America’s fault?