More hope and change of meeting plans…
Sonny Scroggins wants November 4th set up as a national holiday in commemoration of Barack Obama’s win.
Sonny and his group announced their plans at a local McDonalds where they plan on celebrating with cake up until inauguration.
Today, McDonalds kicked them out. 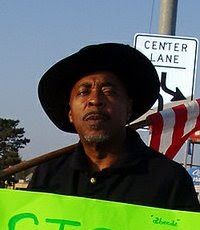 The local push for a national holiday commemorating Barack Obama’s election to the U.S. presidency ricocheted around the Internet over the weekend, drawing criticism from notable conservative critics and nearly crashing The Topeka Capital-Journal’s Web site with an influx of traffic.

The holiday drive is the brainchild of local activist Sonny Scroggins, who had planned to hold brainstorming sessions at the downtown McDonald’s every morning and night until Obama’s inauguration. He said “America grew up” on election night.

Scroggins, who is known for his sometimes quixotic crusades against social injustice, said voting results last week were among the “most profound things that have ever happened to humankind.”

Once his idea was posted on the popular conservative Web site, the Drudge Report, it bounced around to other sites and was picked up by blogs from coast to coast and from Canada to the Netherlands.

Prominent conservative columnist Michelle Malkin mocked it on her Web site: “A national holiday in honor of The One? For heaven’s sake.”

The National Association for the Advancement of Colored People, for one, was receptive if not officially behind the idea. Hilary Shelton, the national vice president of advocacy, said Obama’s election was of tremendous significance for “a community that was once enslaved.”

“Certainly this very historic moment in our history is something that should be recognized, commemorated and celebrated,” Shelton said.

The 145-word brief on The Capital-Journal’s Web site Sunday found its way to the top of the Drudge Report, causing thousands of Internet navigators to flood the Topeka site.

Scroggins hit another roadblock when the downtown McDonald’s, long his staging ground, heard about his upcoming planning sessions…

“You absolutely do not have permission to do any kind of Obama planning,” owner Karen Tyler said in a voice mail left on Scroggins’ phone and played for The Capital-Journal.

Scroggins said he has held court at the fast-food joint for years with no problems and wasn’t sure why he was being kicked out now.

Tyler couldn’t be reached for comment, but the longtime advocate wasn’t relenting. He will be at the downtown McDonald’s at 7 a.m. and 7 p.m. today as planned to let those who show up know of the new plans.

Michelle Malkin has more on the McDonald’s meetings.