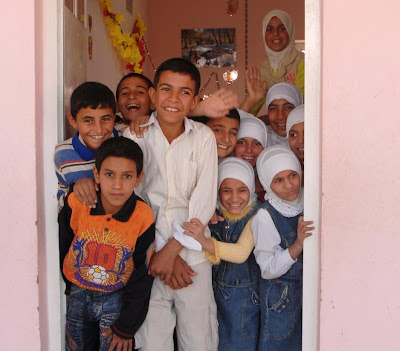 Iraqi students wait in the doorway of their classroom for school supplies to be handed out during visit a school in Jurf Assakkar, Iraq, on Nov. 11. (James Wagner- DVIDS)

Thanks to the Leftists at Think Progress for pointing this out.
White House press secretary Dana Perino today told the gaggle in DC that the conditions are such now that we are able to celebrate the victory that we’ve had so far.
Of course, Perino also added that this would not have been possible if we would have followed the Democrats and cut and run from Iraq:

QUESTION: Yes, sorry, Dana, back to the Iraq agreement again that the Hill is being briefed on. Can you remind us again why this agreement is not the timetable that the President fought so hard against, and also how this does not attempt to tie President-elect Obama’s hands in any way?

MS. PERINO: You remember back in the debate when we were talking about arbitrary dates for withdrawal, that was when there were some members of Congress just suggesting that we get our troops out of Iraq, win or lose, without any sort of planning or thinking about the conditions on the ground. What we’ve seen since then is that as a result of the surge, we’ve been able to have tremendous successes on the security front, both because of the bravery of our soldiers and the work that they’ve done, and also the provincial reconstruction teams that are peopled by people from the State Department and USDA and other places to try to help on the political and diplomatic side of the equation, as well.

This is a mutually agreed to agreement. And that is one of the things that is different about an arbitrary date for withdrawal, when you want — when you say you’re going to leave, win or lose. We believe that the conditions are such now that we are able to celebrate the victory that we’ve had so far, and establish both a strategic framework agreement, which is a much broader document and talks about all sorts of cooperation that we’ll have with Iraq from here on out — from trade and health care and exchanges on science, and a real strong bilateral agreement that you would hope we would have with any of our allies.

These documents usually take years to negotiate. We’ve been able to compress that and do it within the year so that we can look at the conditions on the ground, work with the joint command and with the Iraqis at the plans that they have. And some of the dates that are identified in the document follow the joint command plan. So we are able to consider now having a date that we could have our troops come home. And the details of all of this will be finalized hopefully soon, and then hopefully you’ll hear from the President, as well.

“That we are confident that, if things continue to trend as they have been, our services will not be needed in Iraq, come 2012.”

UPDATE: Jules Crittenden has indicator #52 that the war is over.