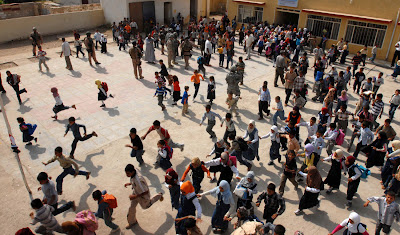 Children play in the courtyard of the newly refurbished Al Abrar primary school, south of Baghdad. A new wing of six classrooms opened for students Oct. 15, 2008. This $496,000 project added much needed classroom space and facilities for the students. (USACE photo)

“THE WAR IS OVER AND WE WON:” Michael Yon just phoned from Baghdad, and reports that things are much better than he had expected, and he had expected things to be good. “There’s nothing going on. I’m with the 10th Mountain Division, and about half of the guys I’m with haven’t fired their weapons on this tour and they’ve been here eight months. And the place we’re at, South Baghdad, used to be one of the worst places in Iraq. And now there’s nothing going on. I’ve been walking my feet off and haven’t seen anything. I’ve been asking Iraqis, ‘do you think the violence will kick up again,’ but even the Iraqi journalists are sounding optimistic now and they’re usually dour.” There’s a little bit of violence here and there, but nothing that’s a threat to the general situation. Plus, not only the Iraqi Army, but even the National Police are well thought of by the populace. Training from U.S. toops has paid off, he says, in building a rapport.

He says the big problem everybody is talking about now is corruption. But hey, we have that here, too. He’ll be heading to Afghanistan next week. “Afghanistan is a bad situation, but on Iraq I can’t believe things have turned out so well.”

He thinks that Obama will be able to pull troops out, and send some to Afghanistan, without creating problems in Iraq. 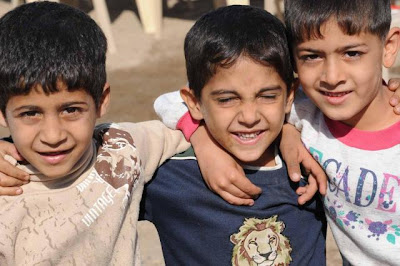 UPDATE: Confederate Yankee has more on the situation in Iraq.