A worker died after being trampled at a Long Island Wal-Mart:
The workers tried to revive the man but he had died in the stampede. 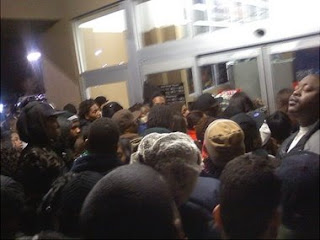 Minutes before the doors opened at the Long Island Wal-Mart this morning.

A Wal-Mart worker died after being trampled when hundreds of shoppers smashed through the doors of a Long Island store Friday morning, police and witnesses said.

The 34-year-old employee, a temporary maintenance worker, tried to hold back the unruly crowds just after the Valley Stream store opened at 5 a.m.

Witnesses said the surging throngs of shoppers knocked the man down. He fell and was stepped on. As he gasped for air, shoppers ran over and around him.

“He was bum-rushed by 200 people,” said Jimmy Overby, 43, a co-worker. “They took the doors off the hinges. He was trampled and killed in front of me. They took me down too…I literally had to fight people off my back.”

The unidentified victim was rushed to an area hospital, where he was pronounced dead at 6:03 a.m., police said.

The cause of death wasn’t immediately available pending results of an autopsy.

A 28-year-old pregnant woman was knocked to the floor during the mad rush. She was hospitalized for observation, police said. Early witness accounts that the woman suffered a miscarriage were unfounded, police said.