The Taliban leader tried to escape the scene in women’s clothing. 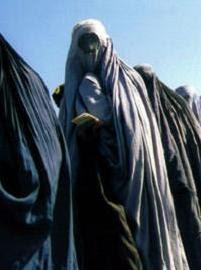 But, when he tried to kill US soldiers he was shot dead in his burqa.

US troops today killed a Taliban Commander clad in a burqa in Afghanistan.
FOX News reported, via LGF:

Gunbattles and airstrikes by NATO and Afghan troops killed 53 militants in Afghanistan, including a wanted Taliban commander who tried to hide from soldiers under a woman’s burqa, officials said Saturday.

The U.S. forces targeting the commander surrounded a house Friday in Ghazni province and ordered everyone inside to leave, a military statement said.

Six women and 12 children left the building, but while soldiers were questioning the women they discovered one was actually a man dressed in a burqa, the traditional all-encompassing dress that most Afghan women wear. The man, later identified as the targeted commander Haji Yakub, tried to attack the soldiers and was killed, the military said.

Yakub allegedly directed roadside bomb and suicide attacksagainst Afghanistan’s government and coalition forces in Ghazni, according to the statement. Three other militants were killed in the operation, it said.